How does a Particulate Filter Work? 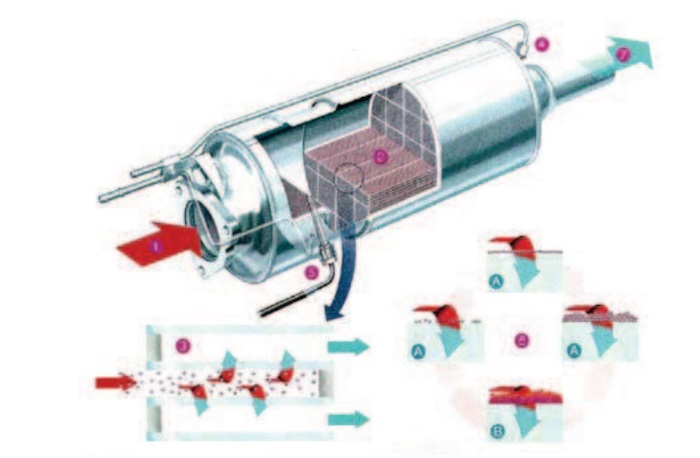 The particulate filter is the only economically convenient device currently available for the abatement of fine dusts emissions from the incomplete combustion of a diesel engine.

The FAP system currently in use in diesel cars is able to reduce particulate emission up to 99.7%, while the DPF will achieve 95% efficiency.

It’s a monolith of silicon carbide, impregnated with platinum and palladium, where its channels are alternatively open and closed. When the exhaust gas enters the filter, it’s forced through highly porous walls, where it will separate from the particulate and come out clean.

Over time, and also depending on how the engine is used, the accumulation of dusts will clog the filter. However, spontaneous regenerations happen, which can be activated by the engine itself (DPF), or by the Eolys fluid, also known as cerine (in the FAP).

How the particulate is formed

In a diesel engine with a stoichiometric combustion, the emission of particulate is zero. During its normal use however, there are frequent transitions when the pump releases more fuel than it can be burnt in a given moment (for example during a sudden acceleration).

Following injection, diesel fuel is nebulized into small drops. Some of them won’t burn completely, but only partially, creating fine dusts with a size of the order of microns. The temperature of the exhaust gas is not enough to burn this uncombusted fuel, which eventually flows towards the exhaust pipe to be released.

The particulate is mainly formed by carbonious material, which needs to be burnt (oxidized) to be removed. This process is called regeneration. The oxidation of the particulate takes place spontaneously in presence of oxygen at a temperature of about 600°C. The typical diesel car engine however, will only operate at temperatures between 300°C and 400°C. As a workaround, two different techniques are available to activate the regeneration:

In either case however, the process is not always successful, and the solution is replacing the filter. On the other hand, washing the filter won’t work, because water and other cleaning liquids won’t affect the clogged pores of the substrate.

We at BRAIN produce particulate filters for almost any car model. We can also regenerate filters by substituting the monolith with a new product with the same quality.

We do not recommend washing the filter, as that may damage it.

To eliminate particulate, it is necessary to create the conditions to trigger a slow combustion that will transform it into Co2, water and nitrogen oxides. In this case, a dry filter is used, which acts as a trap for the particulate.

Over time, residual fine dusts will block the filter, causing a rise in pressure and temperature. The increased heat will trigger a slow combustion that will burn the particulate, empty the filter and regenerate it. The remaining products after the regeneration are Co2, NoX and water.

The exhaust gas is heated by injecting an extra dose of fuel, which burns when it gets in touch with the hot gas, involving most of the fine dusts in the combustion.

A FAP is not different from a DPF: they’re both designed to withhold the particulate, and they both have open and closed channels, but it differs in the way it facilitates combustion of the remaining dusts, reducing the number of spontaneous regenerations of the filter.

Before the filter, a solution is injected, which contains cerium oxide, a catalyst that captures or releases oxygen, depending on the type of gas mix at a given moment.

The injection has the effect of aggregating the dusts and lowering the temperature required for the particulate to ignite. The byproducts of the combustion pass through the catalytic converter, and are transformed into Co2, water and NoX. The uncombusted dusts remain in the filter.

Furthermore, the filter is impregnated with a mix of platinum and palladium, which contributes to the oxidation process, by burning even more particulate.

The presence of an oxidising  catalyst before the filter ensures a continuous regeneration. As a consequence, the catalyst cannot be eliminated, else the filter will clog very rapidly. Lack of impregnation will have the same effect.

To conclude, FAP and DPF are exactly the same thing. The difference is the method they use to reduce the amount of necessary maintenance.

We use cookies to ensure that we give you the best experience on our website. If you continue to use this site we will assume that you are happy with it.OkCookie Policy